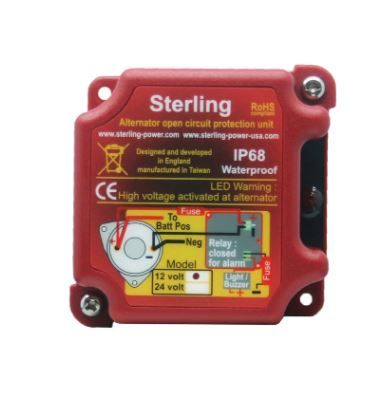 The largest destroyers of alternators in the marine world are when a cable comes loose, a fuse blows or an engine is electrically switched ‘off’ when the engine is running. All these things cause an alternator to be disconnected from the battery while running which causes a massive spike in the alternator. This can easily destroy the alternator regulator and any other advanced regulators in use. To avoid this Sterling Power have a simple device which protects your alternator from that spike offering a simple safe emergency route for that spike to be discharged giving full protection to the alternator’s regulator with no back feed from the device.